Mongolia is a fascinating country with a rich cultural history and warm- hearted people, just in the heart of Asia. Its changeable climate, beautiful wild nature and historical sights make it a perfect holiday destination for visitors.
We take foreign and local visitors from capital city Ulaanbaatar, in the heart of Mongolia, to Huvsugul Lake in the north of the country. You will see spectacular views of the 2nd largest by the area and the 3rd purest water lake in the world. We will take you to the birthplace of Great Chinggis Khaan, Gobi desert and many more destinations where you can enjoy striking scenery of mountains and beautiful nature. You will also be able to visit the World Energy Centers at the ancient Demchig Monastery and Khamar Monastery to renew your energy and meditate. 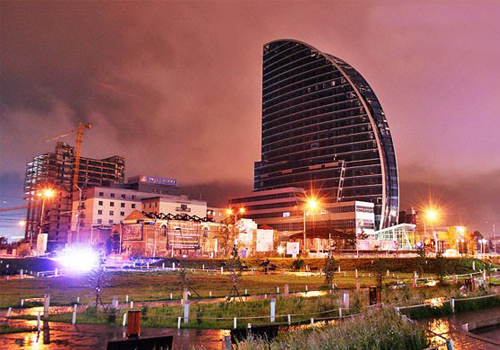 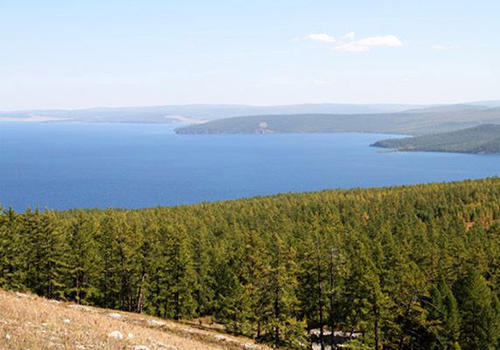 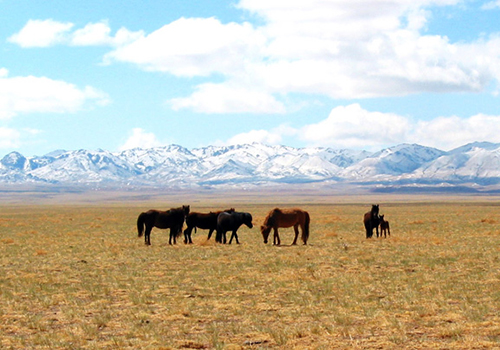 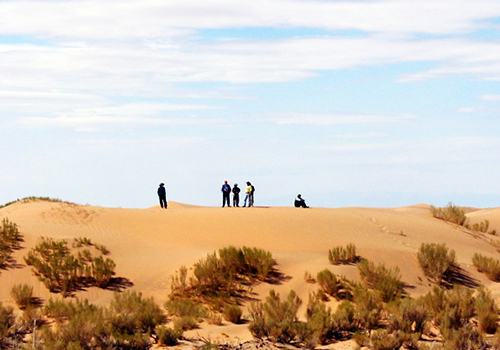 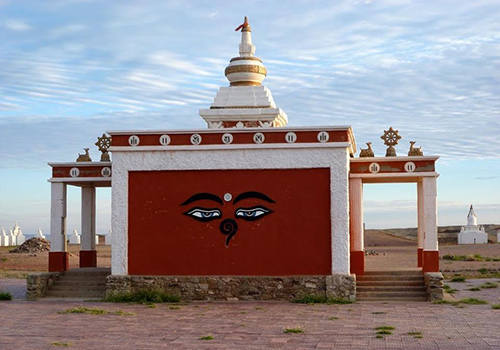 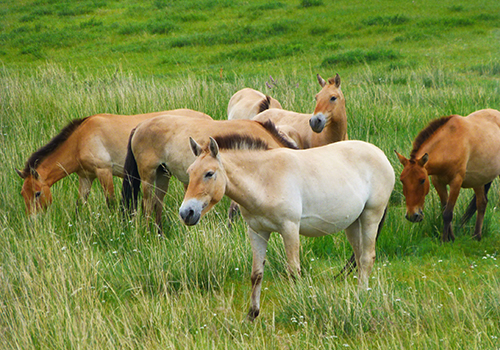 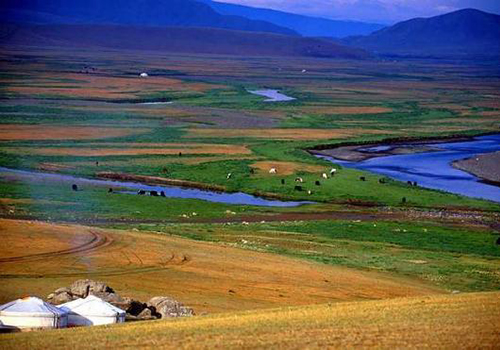 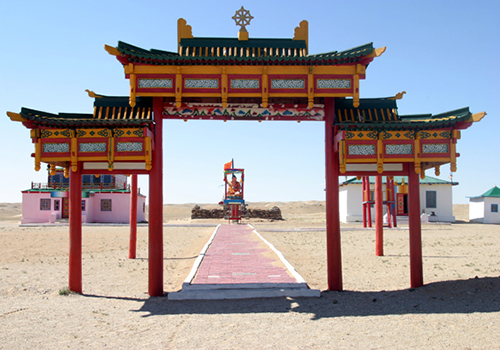 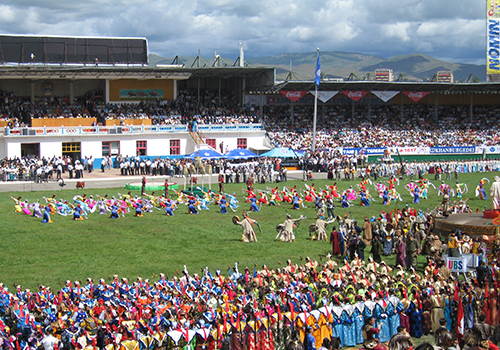 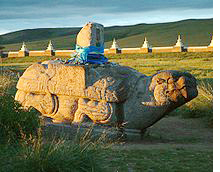 Kharkhorin is located at the lower end of the upper valley of the Orkhon River, part of the World Heritage Site Orkhon Valley Cultural Landscape. The location marks the eastern foothills of the Khangai Mountains, where they meet the rolling steppe of central Mongolia.
Nearby are the ruins of the ancient town of Karakorum, which for a short time served as the capital of the Mongol Empire under Ogedei Khan. Another landmark is the Erdene Zuu monastery.

The main sources of income to Kharkhorin are tourism and agriculture. Water from the Orkhon river serves to irrigate the crops on the large plain east of the town. 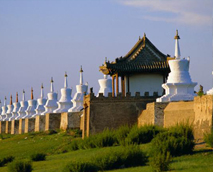 The Erdene Zuu monastery is probably the most ancient Buddhist monastery in Mongolia. It is in Uvurkhangai Province, near the town of Kharkhorin and adjacent to the ancient city of Karakorum. It is part of the World Heritage Site entitled Orkhon Valley Cultural Landscape.

The monastery was built in 1585 by Abtai Sain Khan, upon the (second) introduction of Tibetan Buddhism into Mongolia. Stones from the ruins of Karakorum were used in construction. It is surrounded by a wall featuring 108 stupas, 108 being a sacred number in Buddhism, and the number of beads in a Buddhist rosary. The monastery was damaged by warfare in the 1680s, but was rebuilt in the 18th century and by 1872 had a full 62 temples inside.

In 1939 the Communist leader Khorloogiin Choibalsan had the monastery ruined, as part of a purge that obliterated hundreds of monasteries in Mongolia and killed over ten thousand monks. Three small temples and the external wall with the stupas remained; the temples became museums in 1947. They say that this part of the monastery was spared destruction on account of Joseph Stalin's pressure. One researcher claims that Stalin's pressure was connected to the short visit of US vice president Henry A. Wallace's delegation to Mongolia in 1944.

ErdeneZuu was allowed to exist as a museum only; the only functioning monastery in Mongolia was Gandantegchinlen Khiid Monastery in the capital, Ulaanbaatar. However, after the fall of Communism in Mongolia in 1990, the monastery was turned over to the lamas and Erdene Zuu again became a place of worship. Today Erdene Zuu remains an active Buddhist monastery as well as a museum that is open to tourists.

On a hill outside the monastery sits a stone phallus. The phallus is said to retain the sexual impulses of the monks and ensure their good behavior. 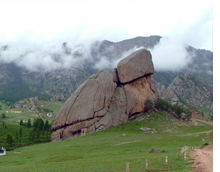 Gorkhi-Terelj National Park is one of the national parks of Mongolia near the capital city Ulaanbaatar. It is connected with Ulaanbaatar by a paved road, takes about 2 hours to get there from Ulaanbaatar. The road ends in Terelj settlement, which features small shops, restaurants and local families. It takes about 60kms from Ulaanbaatar.
Attractions include Khagiin Khar Nuur (Black lake) and Yestii Hot water springs. The park also has a Buddist monastery that opens for visitors. Park wildlife includes brown bears, wolves and over 200 species of birds. The Tuul River flows through the park.

The park has many rock formations for rock climbers, and includes two famous formations named for things they resemble: Turtle Rock and the Old Man Reading a Book (Praying Lama Rock). 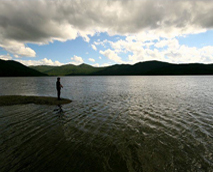 This area is one of the less touristy places in Mongolia. It would be possible to reach the lake on the horseback or walking through. There is not proper road to get there by jeep and traveling on the horseback gives you the great opportunity to reach the lake adventurously. This is a small lake known as Khagiin Khar Nuur, 20 meter deep, buried deep within the mountains and surrounded by lush forests of pine and larch. To reach the lake we will traverse streams, valleys and marsh land. The wildlife in the area is varied and includes musk deer and moose, brown bear, roe and elk 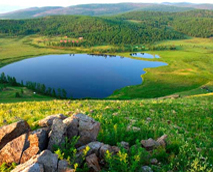 "Khukh Nuur" in the Khar Zurkh Mountain is a beautiful place located in Tsenhermandal soum, Khentii aimag, Mongolia. Besides being a beautiful nature, the place is unique due to the fact that the most important event of history of Mongolia took place here.

"Khukh Nuur" in the Khar Zurkh Mountain is a beautiful fresh water lake located at 1675 metres above sea level. The surrounding areas of the lake are forested Mountains which together form one of the most attractive places in Mongolia. 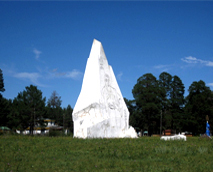 Three kilometers north of Bayan Ovoo is a group of hills known as Deluun Boldog. This is where Chinggis Khaan was born. As Deluun Boldog is one of the most important historic locations in Mongolia, one should definitely take the time to visit the historic sites and monuments of Deluun Boldog. The hill is topped with a stone monument dedicated to honor the 750th anniversary of "The Secret History of the Mongols," a 13th century chronicle of the empire, which indicates the location of the Great Khan's birthplace. 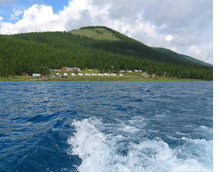 Try to imagine a 2760 sq km (1080 sq mi) alpine lake, with water so pure you can drink it. Then add dozens of 2000m (6560ft) mountains, thick pine forests and lush meadows with grazing yaks and horses, and you have a vague impression of Khuvsgul Nuur, Mongolia's top scenic heartstopper. This is the deepest lake in Central Asia, and the world's 14th largest source of fresh water. Situated along the border with Russia, the lake is sacred to local Mongolians, who refer to it as 'mother'. It's full of fish and the area is home to sheep, ibex, bear and moose, as well as over 200 species of birds. There are numerous caves around the lake, though they're hard to find without a guide. Three separate peoples live in the area: Darkhad Mongols, Buryats and Tsaatan.

An amazing 90 rivers flow into the lake, but only a single river flows out - the Egiin Gol, which ultimately reaches Lake Baikal in Siberia. Khuvsgul Nuur freezes in winter, allowing huge trucks carrying fuel to cross from Siberia. Visitors can kayak on the lake when it unfreezes, and hike or ride on horseback (or yakback) around it.

The southern boundary of Khuvsgul Nuur is about 775km (480mi) north-west of Ulaanbaator and is reachable by occasional plane, bus or your own jeep. The best time to visit is in spring (around April and May). It's still very cold at this time and the lake may be frozen. The summer (July and August) is warmer but more crowded. Permits are required to visit the lake. They're available on the main road into Khuvsgul Nuur National Park, a few km before the southern entrance at the town of Khatgal.

It is impossible to imagine Mongolia without the uniquely magnificent and pristine land of Khuvsgul or lake Khuvsgul. Lake Khuvsgul covers an area of 2760sq.km and exists at 1605 m above sea level. Khuvsgul is the deepest lake in Central Asia, with a maximum depth of 262metres. It's water is crystal clear and fresh. 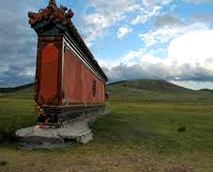 The monastery was established by order of Manju emperor Enkh- Amgalan Khan, to cherish and give respect to the Undur Geghen Zanabazar, his skills, wisdom, intellect and accomplishments.

One hundred thousands langs (=3730 kg) of silver from the state fund were used to build a magnificently styled place for Buddha teaching and practice in honor of Zanabazar. After searching for a suitable place, the construction works of the monastery called “ Amarbayasgalant ‘’, a palace for God `s meditation , began in the year of red horse,1726, and was completed in the year of red dragon, 1736. Out of deep respect the monastery was then offered to the Undur Geghen.

In 1937-38 a fearsome repression covered Amarbayasgalant Monastery and all the highly trained knowledgeable monks were executed. Also huge numbers of rare religious relics, books, sutras, thangkas and Buddhas which had been collected for 200 years, were destroyed completely. This is how the holy temple of Amarbayasgalant became mere ruins and it was abandoned for 50 shady years.

1990 was the time when the circumstances came for Amarbayasgalant to be restored. Communism had fallen and the people were eager to revive their religious tradition. Under Geghen's monastery Amarbayasgalant was reestablished and nowadays stands strong on its remarkable construction, as on its 300 year history. 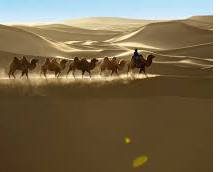 Stretching from the southern Khovd aimag to the Dariganga region in Sukhbaatar, the Gobi covers a third of Mongolia. Fossil finds have recealed that the Gobi basin was once part of large inland sea. The word "Gobi" simply means `desert` in the Mongolian language.

The Gobi is a land of extremes: decent rain does not falls really often. it can be well over 40`C during the summer, and below -40`C in winter. And storm of dust and sand are fearsome in spring.

The Gobi is understandably very sparsely populated, but the desolate landscape is home to gazelle, khulan (wild ass), Bactrian two-humped camels, takhi (the Mongolian wild horse), rare saiga antelope and the world's only desert bears- the Gobi bear, og which there are only 25 left in the world. Here are some of the most attractive destinations in the Gobi desert. 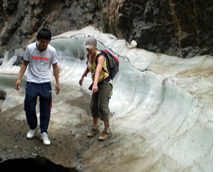 The Yol Valley, a protected site in 1965, is 62 kilometres north-west of Dalanzadgad. Yol valley was originally established to conserve the birdlife in the region, but it's now more famouse for it's dramatic and very unusual scenery- it is a valley in the middle of the Gobi desert, with metres-thick ice for most of the year.

The small museum at the gate on the main road to Yol valley has a collection of dinosaur eggs and bones, stuffed birds and snow leopard.

From the museum, the road continues for another 10km to a car park. From there, a pleasant 2km walk, following the stream, leads to an ice-filled gorge. Locals also rent horses and camels for about $6US for the trip. 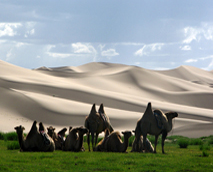 Khongor Sand Dunes are some of the largest and most spectacular sand dunes in Mongolia. Also known as the duut mankhan (singing dines), they are up to 300m high, 12km wide and about 100km long. The largest dunes are at the north-western corner of the range. You can climb to the top of the dunes with a lot of effort and then slide back down if you have a garbage bag handy. The views of the desert from the top are wonderful. 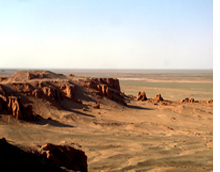 Bayanzag, which means "rich in saxual shrubs", is more commonly known as the "Flaming Cliffs", penned by the palaeontologist Roy Chapman Andrews. First excavated in 1922, it is renowned woldwide for the number of dinosaur bones and eggs found in the area, which you can see in the museum of Natural History in Ulaanbaatar. Even if you are not a "dinophile", the eerie beauty of the surrounding landscape is a good reason to visit. It is a classic desert of rock, red sands, scrub, sun and awesome emptiness.